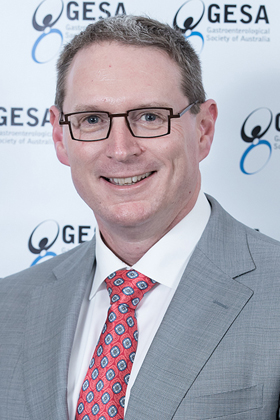 Benedict Devereaux completed his undergraduate medical degree at the University of Queensland in 1991.  He undertook his junior training and subsequent Gastroenterology training at the Royal Brisbane Hospital, Brisbane, Australia.  This culminated in his obtaining fellowship of the Royal Australasian College of Physicians in 1998.

Ben then completed fellowships in endoscopic retrograde cholangiopancreatography (ERCP) and endoscopic ultrasound (EUS) at Indiana University Medical Center in Indianapolis, Indiana, USA between 1999 and 2001.  During this time, he developed a specific interest in the staging and management of pancreatic cancer.  His work in this area formed the basis of a Masters of Philosophy awarded by the University of Queensland in 2006.

On returning to Australia in 2001, Ben accepted a position at the Royal Brisbane and Women’s Hospital where he is now a Senior Consultant Gastroenterologist performing and teaching advanced endoscopy, in particular ERCP and EUS. Ben is a frequent invited speaker and demonstrator at national and international scientific meetings and live endoscopy workshops. He has attained fellowships of the American College of Gastroenterology and American Society for Gastrointestinal Endoscopy. In 2013 he received the academic title of Associate Professor of Medicine from the University of Queensland Medical School. Ben is actively involved in clinical research in the areas of advanced pancreatico-biliary endoscopy, pre-operative weight loss and gastrointestinal mucosal immunity. He is the editor of the Handbook of Clinical Pancreatology. Ben is an executive board member of the Gastroenterological Society of Australia, chairing the Finance, Audit and Risk committee and the Infection Control in Endoscopy Committee.

GESA is a not-for-profit organisation

For all media, social media, event and stakeholder engagement inquiries please contact the GESA Communications Team at gesa@gesa.org.au or on
1300 766 176.

For membership information please contact the GESA Membership Team at memberservices@gesa.org.au or on
1300 766 176.

Images used on this site may include stock photos and the associated information may not represent the personal situation, views or beliefs of the people in the images.